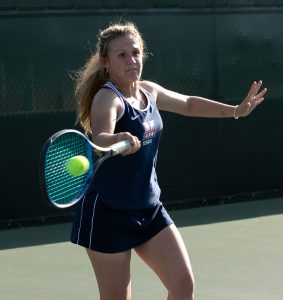 #1 singles, senior Georgia Wilder is 5-3 on the season

After having their season postponed from the Fall due to COVID, and with lots of uncertainty as to whether there would even be a season or a team, the Lady Minutemen are back for a season like no other. Though playing through so many unprecedented factors, and though playing without a full squad, there has been a warm camaraderie, joy, and fellowship that has made the tremendous amount of work to get the season started worth it. This season is not about wins and losses, nor about competing for a championship. This season is about … being back, being together, being free to come together as a team and compete … together.  Never has the word “together” held such significance or been so valued as it does right now for this team.

Despite forfeiting 3 sets every time they play, the team is 2-1 on the season

Next up for the Lady Minutemen are the Warriors of Heritage Christian on Wednesday, 4/28, at 1:30 p.m. at the Burbank Tennis Center.