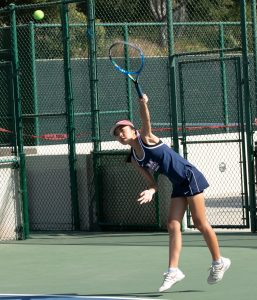 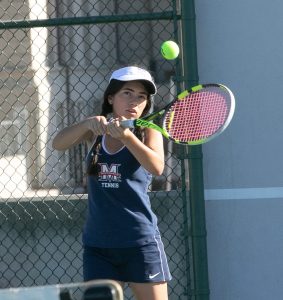 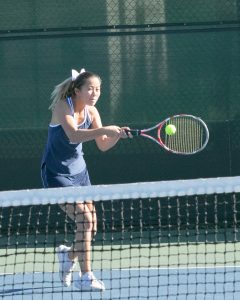 It was a tight match from beginning to end, as the Lady Minutemen and Bruins met for their first-ever match at the Whittier Narrows Tennis Center. The two teams traded blows right down to the match-deciding final set. With both teams missing their #3 doubles teams, both teams competed in 13 total sets (9 singles, 4 doubles).

Georgia Wilder, Audrey Loh, and Amanda Yee/Bethany Ang paced Maranatha in the first round of play, giving them a 3-2 lead.  The Bruins bounced back with a 3-2 second round, with Stella Hsieh and Yee/Ang accounting for Maranatha’s points. That left a final singles round of play.

Barring a significant upset in one of the other sets, the determining matchup was going to be #2 Stella Hsieh against the Bruins #1. Whoever won that set would give their team the victory.  The set started with both players splitting the first 4 games, 2-2.  That’s when Hsieh buckled down and turned her game up another notch, taking the next 4 games and winning the set, 6-2, effectively giving the Lady Minutemen a hard-fought 7-6 victory.

After dropping their first match, the Lady Minutemen have now reeled off 4 victories in a row and are now 4-1 on the season. Their season finale will be on Wednesday, May 5, at 3:30 p.m. against the Warriors of Heritage Christian. It will also be the final match in the career of #1 singles player, Georgia Wilder.