LaVar Arrington Leads the Minutemen to Victory in His Debut

The Maranatha football team finished off a day full of fun for students who began the day with Uprising by defeating Glendale High School on Friday evening.  The game featured tons of big plays, which led to their 42-0 season opener win and first career win for new head coach LaVar Arrington.  Coach Arrington is a former two-time All-American linebacker from Penn State and was picked second overall by the Washington Redskins in the 2000 NFL Draft.  He was previously an Assistant Coach at Long Beach Poly. With this resume Coach Arrington proved to all in attendance on Friday that he is ready to lead Maranatha to a fun and victorious season.

The Minutemen started the game with excitement.  After some miscommunication with the opening kickoff return, senior Zack McClendon ran by everybody and scored the first touchdown of the game.  The Minutemen’s defense then held the Nitros to a three and out. On the Minutemen’s first offensive play of the game starting quarterback Enrique Garza threw one of his three touchdown passes to junior Isaac Fields.  During the Nitros next possession, senior Sabien Rivera tackled the punter in the end zone for a safety which gave the Minutemen a commanding lead of 16-0 at the end of the first quarter.

The Minutemen and Nitros went back and forth during the second quarter as neither team was able to move the ball effectively down the field, but that changed when the Minutemen attempted a fake punt.  Jacob Kefalas threw a 44-yard reception to Zack McClendon, which allowed the Minutemen to score a 35-yard field goal that was kicked by Jacob Kefalas. Zack McClendon ended the first half in style by scoring on a 17-yard carry which was his only carry of the game.  At halftime the Minutemen had a 26-0 lead over the Nitros.

In the second half, Esparza continued the Minutemen’s success when he connected on a nine-yard touchdown pass to Jacob Moreno and a 15-yard scoring toss to Jack Goodman.  Esparza finished the game by completing eight of nine passes for 121 yards and threw for three touchdowns in his first game as the Minutemen’s starting quarterback. Esparza’s go to targets were Zack McClendon who finished the game with two receptions for 54 yards and Isaac Fields who caught three passes for 67 yards.  Maranatha ended the game by scoring another safety as Sabien Rivera tackled the punter in the end zone for the second safety of the game.

The Minutemen held the Nitros to a total of minus-4 yards for the game, while they finished with a total of over 300 yards for the game.  When asked about how it felt to get his first win as head coach of the Maranatha football team Coach Arrington told the LA Times that, “It’s a relief.  You hope that all the hard work results in what it’s supposed to be. They deserved to have the showing that they did.”  The Minutemen’s next game will be at home against Pasadena High School at 7pm next Friday, August 24th. 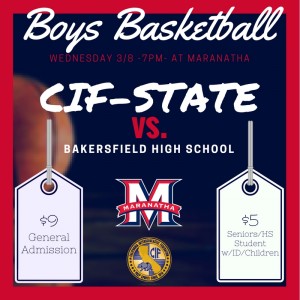 On Friday December 16th, our Lady Minutemen soccer team will host the El Monte Lions at 5:30pm in a non-league match-up that’s sure to be exciting.  Our girls have been working extremely hard and are looking forward to putting on a great performance under the lights.  Natha Nation, make sure to come out ready to cheer the girls on to victory.

Get out to a game or two this week and support your Minutemen. 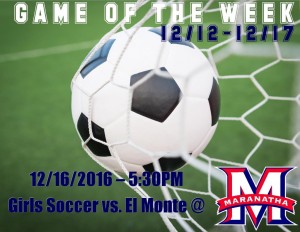 This week we host two league games on campus that you don’t want to miss.

First, on Tuesday October 25th, our Lady Minutemen volleyball team will host the Village Christian Crusaders at 6:15pm in a showdown for second place.  We will be honoring our six seniors immediately following the JV match.  Make sure to arrive early and help us celebrate the achievements of our incredible seniors by cheering them on to victory.

On Wednesday October 26, our cross country team hosts the Whittier Christian Heralds at 4:30pm in our final league meet of the season. The race will take place on the Maranatha home course, which starts on the south lawn, loops around the campus on the sidewalk 3 times, and finishes at the “M” of the football field.  This will be your last opportunity to cheer on our Minutemen at home.  Natha Nation, let’s show up in droves and encourage the athletes for all their hard work.

Get out to a game or two this week and support your Minutemen. 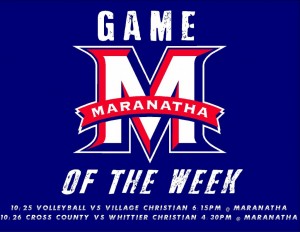 Two games this week that are on the road but will be well worth the travel.

First on Thursday, girls tennis will face co-league leader, Whittier Christian, to all but decide the 2016 Olympic League champions. The teams split their first two matches two weeks ago, with the Lady Heralds snapping Maranatha’s 4+ years, 37 match league winning streak. Now they aim to follow-up on that performance to win the league crown for the first time in 5 years. The Lady Minutemen hope to have something to say about that, desiring to win Maranatha’s 5th consecutive league title. It should be a tremendous, hard-fought match. Come out and support our girls at La Mirada Tennis Center at 3pm.

Next, our football team travels to Whittier College on Friday and also face Whittier Christian. Both teams are coming off tough fought defeats and are eager to get back in the win column. Your Minutemen need our support so make sure to come out ready to cheer the boys on to victory. 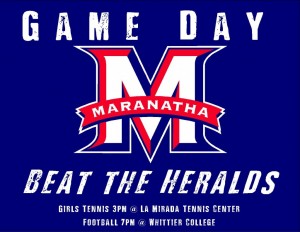