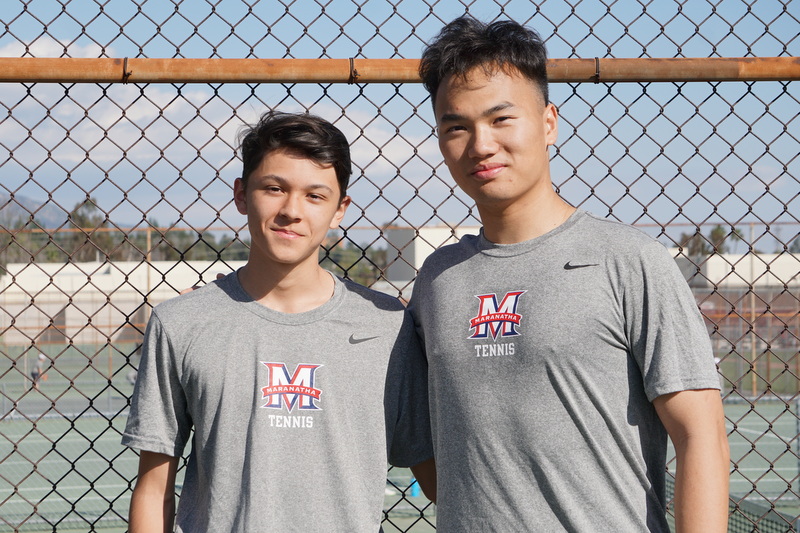 In a match with playoff atmosphere and playoff intensity, the CIF-SS D4 #1 ranked Minutemen faced off with the CIF-SS D2 #10 ranked Walnut Mustangs, a deep, well-disciplined team.

It was a close match throughout and could possibly have turned the Minutemen’s way had #2 singles player, JP Collins, been at full health. Plagued by illness, Collins gutted out a 7-6 victory in his first set. Sapped of energy, he stumbled to a 2-5 deficit before clawing his way back to a 6-5 lead. He couldn’t keep up the momentum, however, and lost, 6-7.

With Tan and Scott completing their sweep, 7-6 (coming from behind, 2-5, in the tie-break), as well as the first win of the day for #1 doubles Matthew Leiva and Michael Mathews, the Minutemen had an 8-7 lead in the 3rd round.

After a loss by Cho and Huang, the match was squared up at 8-8 with the final two singles sets still on court. With Nico Engling down 4-5 and Daniel Guan tied up at 5-5 (after being down, 2-5), the match was up in the air. At the end, Engling lost, 4-6, while Guan ran out of gas, succumbing to his fitter opponent, 5-7.

It was a solid effort by both teams with 8 sets decided by two games or less.. The Minutemen, now 13-2, head to San Gabriel HS on Tuesday to complete their match that was suspended due to rain earlier in the season.