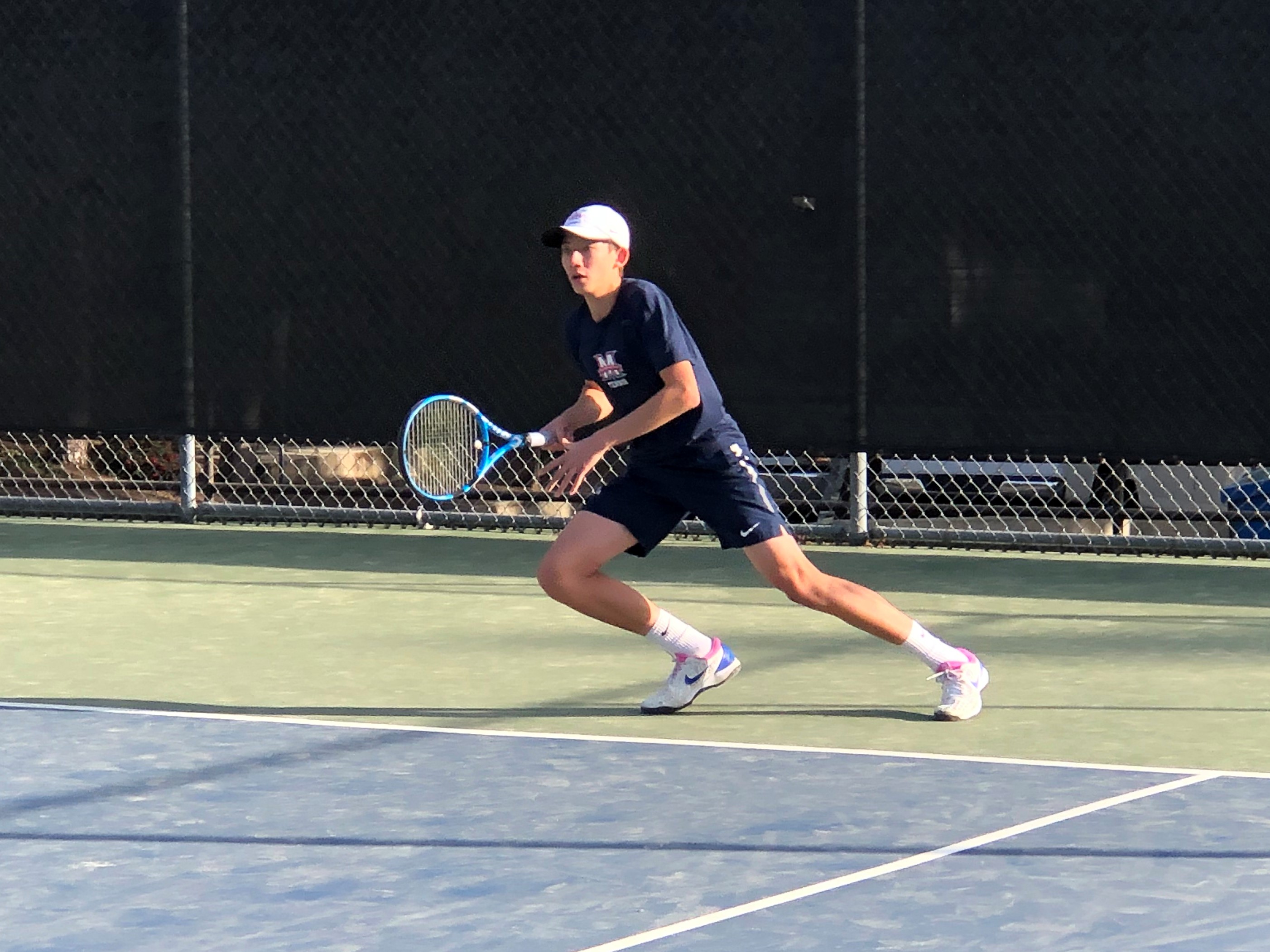 The road-weary Minutemen came to Rowland for their 3rd match in 4 days, playing the second of back to back road matches, after playing at UCLA yesterday. The D-3 Raiders doubles teams were definitely at another level of play than any of the teams MHS has faced this season, blitzing Maranatha’s doubles teams, 6-3, 6-0, 6-0 in the first round.

MHS’s singles lineup kept the Minutemen in the contest with #1 Jake Scott and #3 Tim Huang registering 6-4 and 6-2 victories. With #3 Nico Engling down, 1-4, then 2-5, it was a foregone conclusion that the second round would begin with the Raiders ahead, 4-2. In fact, Coach Arthur Hsieh prepped the rest of the team to start the second round with that understanding, as Engling was still on the court, having evened the score at 5-5 before going down 5-6. Engling tied the score, 6-6, but fell behind 3-6 in the tie-breaker up to 7. Fending off 3 match points, Engling miraculously prevailed 9-7 to even the overall match at 3-3.

#1 Michael Mathews/Kenny Cho broke through the doubles drought with a 6-4 win in the 3rd round, while #2 Alex Forsyth/Jordan Miao lost 2-6, their only 2 games of the entire match. #3 Joshua Im/Shahe Yerevanian lost 1-6, also getting swept. With the Raiders ahead 9-7, it was up to Scott and Huang to win out to tie the match.

With darkness setting in, down 3-4 and not playing his best, Scott found a way to will himself to a 6-4 victory. With Huang at a 1-4 deficit against Engling’s first opponent (who also beat Scott), it appeared that the Minutemen would lose 8-10. However, just like Engling did in round 1, Huang soared back to tie the set and even hold a 5-4 lead before surrendering the next 2 games. He tied the set at a 6 apiece and fended off a match point at 5-6 before dictating play and winning the tie-break 8-6 and tying the match at 9-9.

Alas, the massive doubles losses ensured a Raiders victory on games, 83-70, handing Maranatha their first loss of the season. Like boxers who embrace after a hotly contested battle, the Minutemen and Raiders sincerely shook hands and gave each other respect afterwards, knowing that they pushed each other to their limits.

The 6-1 Minutemen head on the road again on 3/10 and 3/12 against Azusa and Alhambra, provided the weather holds up.