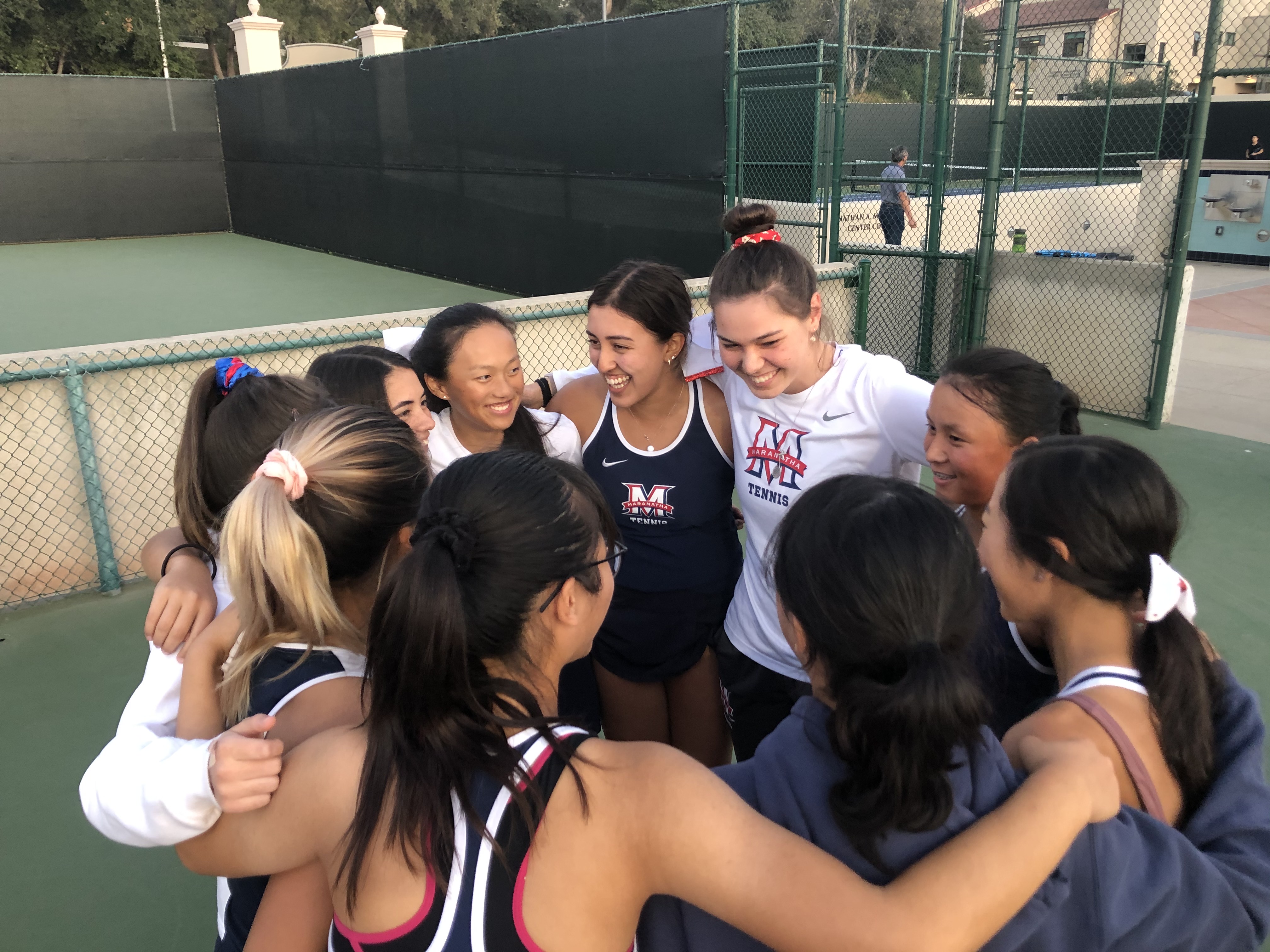 The already depleted Maranatha team was dealt its final blow today as league doubles MVP, Georgia Wilder, could not play due to a severe stomach flu. Already without 2018’s league singles and doubles MVP’s, Maddie Kane and Michael Wilkins, and Millie Garcia, this latest loss left the Lady Minutemen unable to field a full team, forcing them to forfeit 3 sets.

That tandem worked well for the Lady Minutemen, as they won their first two sets, 6-4, 6-2, before succumbing to the Brahmas #1 doubles league champs, Liz Peng/Kelly Tsao, 4-6. Aria Haver-Hill/Bethany Ang lost their first two sets, 1-6, 2-6 before turning it on in the final set, and winning, 6-4. Fay Sheng/Jeanne Yang lost all three sets, 1-6.

Freshmen Stella Hsieh and Audrey Loh, both doubles players at the start of the season, were the lone two singles representatives for MHS today. They each suffered from nerves playing on the court alone in their first playoffs, but managed to find a way to stay competitive. Hsieh lost her first set to DB’s #2, 6-7 (2), after holding a 6-5 lead. Loh lost her first set, 4-6, to DB’s #3 player after holding a 4-1 lead. Loh and Hsieh both lost to the Brahmas #1 3-star tournament player, Chloe Cadelina, 0-6, 1-6 respectively.

In the day’s final lone set, with both teams and fans looking on, Hsieh finally conquered her nerves and played solid tennis to close out the #3, 6-3.

Today’s match marked the last match seniors Smith and Haver-Hill will play as Lady Minutemen. Along with Kane and Wilkins, who played their last matches earlier in the season, this senior class leaves as the most decorated and accomplished senior class both in Maranatha and Olympic League history.

Their leadership on and off the court will be sorely missed as Maranatha looks to begin rebuilding next season.

Though the season didn’t go as the team had hoped or planned in their first season in Division 3, the Lady Minutemen forged a strong bond together and took away some valuable lessons that will serve them well both on the court and off in the future. To God be the glory!