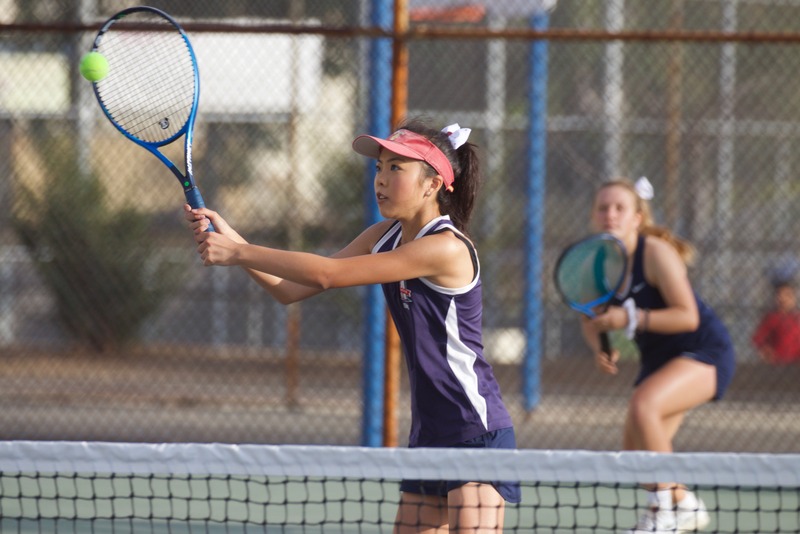 With today’s victory, Maranatha secures its 7th Olympic League championship in 8 seasons under Coach Arthur Hsieh. With a victory in its final league match on October 22, MHS can also lock up its 7th season in 8 years of going undefeated in league.

There were actually a lot of sub plots in this match with the Valley Christian Defenders: Could the Defenders capitalize on MHS’s injuries and defeat them for the first time in 8 years? The top singles and doubles sets would, for all intents and purposes, determine the league singles and doubles MVP’s, as well as the seeding for the end-of-season league tournament for the top 8 singles players and top 8 doubles teams in the league.

For the second match in a row against MHS, the Defenders switched their line-up in an attempt to preserve their top singles player’s winning percentage, as well as to lower the winning percentage of Maranatha’s #1 and #2 doubles Georgia Wilder/Amanda Yee and Stella Hsieh/Bethany Ang. At stake are the MVP’s, All-League Teams, and tournament seeding.

Aware of all of this, Wilder/Yee and #1 singles Malena Smiith came out with a vengeance and played punishing tennis. They made sure there was never going to be any doubt. Smith didn’t lose a game all day, “triple bageling” her opponents, 6-0, 6-0, 6-0. Wilder/Yee were nearly as dominant, registering 6=1, 6-2, 6=0 wins. Barring the unexpected in the final league match, they should end up with League MVP honors.

Next up for the 10-2 Lady Minutemen are the formidable Temple City Rams. The match is on Thursday at 3 p.m. at Occidental College.