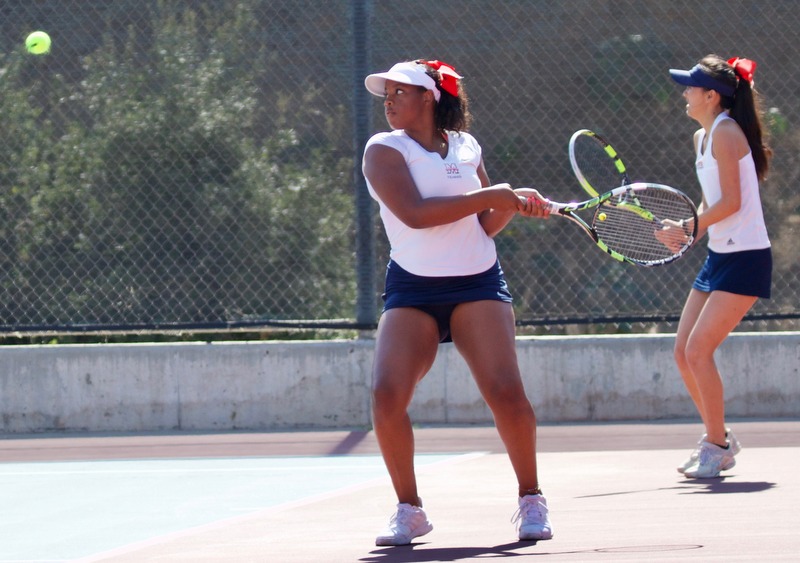 It was the second day of two extremely hot back-to-backs on the road. Though the Lady Minutemen prevailed convincingly in the score line, there were a few close doubles sets that served as a wake up call.

In the opening round of play, #1 doubles (Michael Wilkins/Aria Haver-Hill) and #3 doubles, Bethany Ang/Stella Hsieh, easily took their sets, 6-1 and 6-2, respectively. #2 doubles, Georgia Wilder/Amanda Yee, however, quickly found themselves behind, 0-4, and then 2-5, before storming back for a 7-5 victory.

The second round found the Wilkins/Haver-Hill in the same predicament against the same team, as they fell behind 1-4, before mounting their own comeback to win, 6-4. They finished the day with a 6-0 victory in the third round. Wilder/Yee went 6-2, 6-1, and Ang/Hsieh went 4-6, 6-2 in their final two sets.

On the singles side, the duo of #1 Madison Kane and #2 Malena Smith once again swept all the sets they played, 6-0. Both players have yet to surrender a game in any of their sets thus far. #3 won her opening set, 6-0, as well, before succumbing to their #1, 1-6. Alternates, Jeanne Yang and Audrey Loh, subbed in the third round for Smith and Sheng, each losing, 1-6.

Next up for the Lady Minutemen will be the formidable Westridge Tigers, who defeated MHS, 9-9 and 10-8 the previous two seasons. The Tigers played this same San Gabriel team last week and crushed them, 18-0.

It will be an away match and will be played at the Tigers’ home courts at John Muir HS at 3:30 p.m.