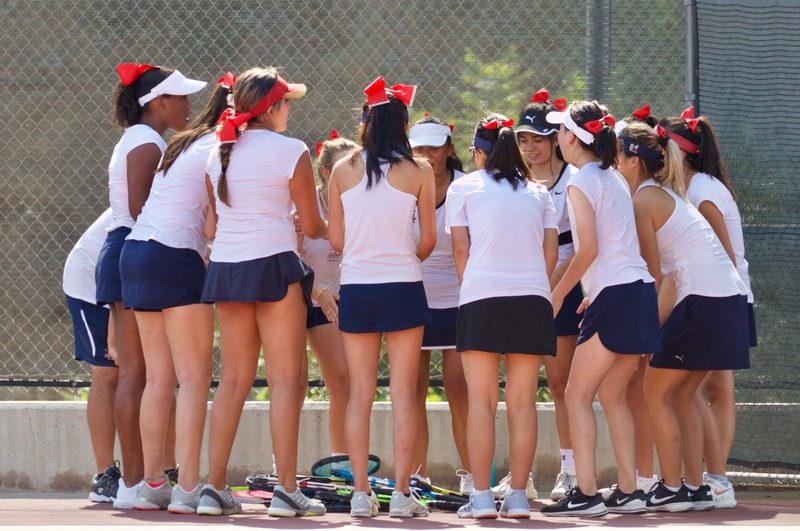 In a match up of the top two teams in the Olympic League, the Lady Minutemen made quick work of the Defenders, sweeping the first round and securing the victory in the second round, 10-2.

Though the score was one-sided, the match did have some significant moments for Maranatha, some which will need to be addressed if the Lady Minutemen hope to do well in the playoffs.

After coasting in the first two rounds, 6-1, 6-0, #2 Georgia Wilder/Amanda Yee found themselves In a rematch of last season’s league tourney semi-finals between league #2 Wilder/Yee and #3 Mary Lou Ruiz/Makani Kane (Wilder/Yee won 7-6, 6-2), This time, Ruiz/Kane turned the tables and won running away, 6-1, to take the lead for second place in the league doubles race.

Living on the edge so far this season, Wilder/Yee have routinely found themselves behind late in sets, only to rally for dramatic wins. Any sports enthusiast knows, however, that cannot be sustained for an entire season. Wilder/Yee, still looking to find their stride, will be a key component to Maranatha’s chances of faring well in their new “playground,” Division 3, where the competition is much tougher than last year’s Division 5.

Also integral to the MHS’s success this season will be the development of #3 Bethany Ang and Stella Hsieh, who continue to show promise, but still have to learn to close out sets. Ahead the entire set against the #1’s, including owning two set points at 5-4, they weren’t able to close the door, falling 5-7. Their continued development will be needed. They won their other two sets, 6-3, 6-2.

MHS (5-1) will host the Temple City Rams next Tuesday, 9/24 at 3 p.m, at Pasadena High School. Maranatha has not beaten Temple City in the modern era.